A mixture of borax and ammonium chloride is used as a flux when welding iron and steel. It lowers the melting point of the unwanted iron oxide (scale), allowing it to run off, to keep the metals clean during the forging process.

Borax is also used mixed with water as a flux when soldering jewellery metals such as gold or silver. It allows the molten solder to flow evenly over the joint in question. Anhydrous Borax is used as a de-oxidiser which cleans impurities from the smelt. Borax is also a good flux for ‘pre-tinning’ tungsten with zinc – making the tungsten soft-solder-able.

Borax, also known as sodium borate, sodium tetraborate, or disodium tetraborate, is an important boron compound, a mineral, and a salt of boric acid. It is usually a white powder consisting of soft colourless crystals that dissolve easily in water.

Anhydrous Borax is used for smelting, melting, glazing crucibles, and casting gold as well as other precious metals.

It is used as a flux thinner and it lowers the melting point of the gold or precious metal in the smelting process. 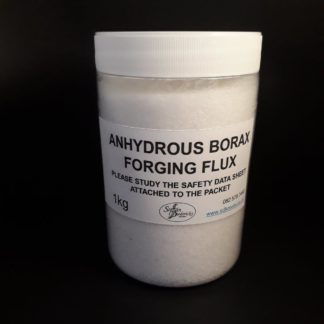 Please note courier fees are calculated on a sliding scale according to weight as per The Courier Guy's Rates. Dismiss